Why we should change the Electoral College 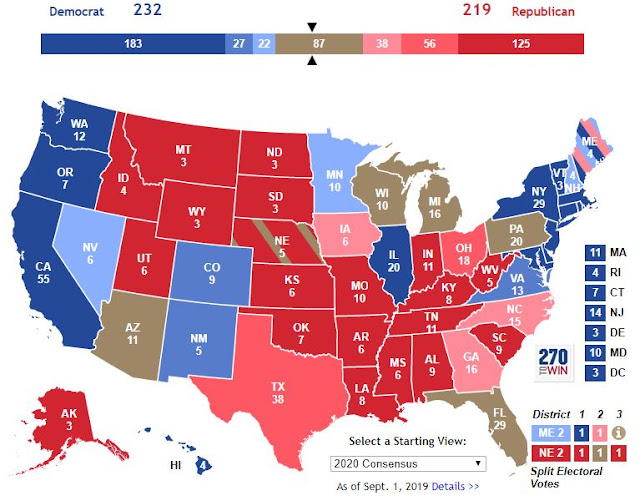 So, many of you have heard the term "Electoral College" and may or may not be aware of what it is and what it does. On a very basic level, they are the ones who determine the next president.

They are an elected body of voters. There are 538 of them. A  candidate needs 270 votes to win. Each one represents a group of voters from a certain area. Some states have more representatives depending on their populations, but every state (and DC) at a minimum gets at least 3. When you go to vote, you are actually only voting for how you want your representing delegate to vote, and it is up to that delegate to accurately convey their constitutes views.

Well, in general, this elected body does a good job voting in line with how their voters think, but this is not always the case. Some states force delegates to vote according to their constitutes views, but some do not. And most states have a "winner takes all policy" meaning if a state has 8 votes for a democrat, 7 for a republican, and 2 for a third party candidate, then all 17 votes would be applied towards the democratic candidate only.

That is one of the main reasons why people argue the electoral college is bad. It does not always reflect an accurate vote of the country as a whole. Some people argue for eliminating the electoral college all together and instead just allowing the popular vote to decide. The reason the electoral college even exists is because the founding fathers believed that the common person was not informed enough to vote for the best candidate. And back then, that was probably true. Most people could not, or did not see or know a candidate or their political views. However, with the emergence of technology, this changed the political landscape.

With the invention of the automobile, radio, television, the internet, and now social media, most Americans today have seen, hear, or read about multiple candidates, which would have been unfathomable back then. That makes americans far more informed than they used to be, which leads to the question of why should we vote for a body of representatives to vote on our behalf rather than just vote ourselves?

The least populated state is currently Wyoming with a population of around 577,700. The most populated state is California with a population of around 39,560,000.  That's roughly 68 times the population of Wyoming. But California only has 55 delegates and Wyoming as 3. That means each California delegate represents around 719,273 people while each Wyoming delegate represents 192,567. This means that an individual in Wyoming has greater impact to influence the outcome than a California individual, so even though California may have a lot more people, a smaller state like Wyoming can still have the potential to impact an election.

That is a large reason of why Donald Trump was able to so easily defeat Hillary Clinton. While she received more popular votes, he was able to win in the smaller populated Midwestern states which was enough to counter the larger states she had won. He also won some larger states too, but the smaller states were able to impact why he won. Had the electoral college been eliminated, she would have won.

One thought that's very interesting to note though is that if the electoral college was still in place, but instead, we removed of the "winner takes all" policy and instead switched to a representational vote, what would the result have been. It would have made for a much closer race. 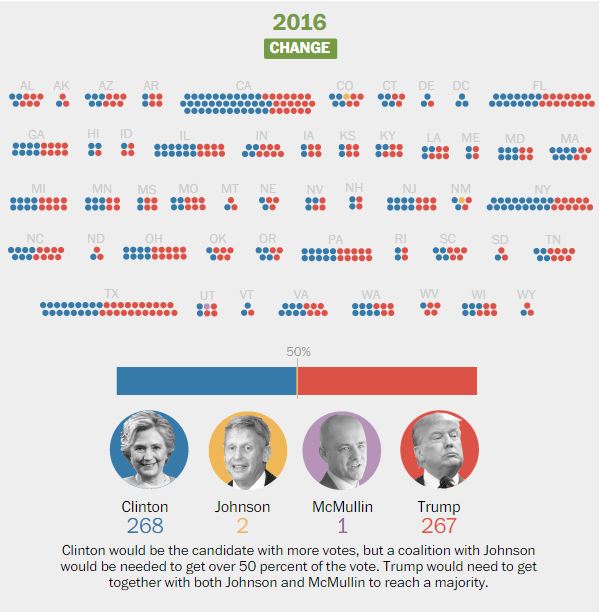 With this policy in place, none of the candidates would have enough votes to win and would need to unite with a another political party to reach the 270 number. This could have made for some very interesting politics as political parties would be forced to compromise and work together.This idea may also remove some of the political polarization from politics since parties would be forced to work with each other. To me, this idea seems to be a good once since it allows for a more fair version of the electoral college, while still allowing smaller states to have an impact, though potentially not quite as much as they otherwise would, but big states would have less impact also.

I think the biggest issue people seem to have with this idea is that it gives third parties a substantial impact in influencing the outcome of elections. Where they otherwise would have no chance of being willingly brought to the table, this new system could cause them to become an integral part in the election process and potentially increase their name recognition, membership, and standing within the political community.

Right now, the party system is very much like a monopoly. This idea would in a way, divide the monopolies to effectively to unite the people.