What would happen if Wile E. Coyote caught the Road Runner? Or if Anakin could save his wife? Or if Littlefinger was able to win the affection of Catelyn Stark? All of these are impossible tasks, that, if they happen, would be an end all for the plot. Would Tom just continue living his life without Jerry, or would he feel an empty void and seek to find a replacement to continue his cat and mouse games?

Let's apply this to a none television plot. Take, for example, an explorer who spends their life trying to discover the secrets of the Mayan empire. Or a scientist that spends their life trying to find a cure for cancer. Or a guy who's trying to get out of the friend-zone with a girl? Or a person trying to get their dream job? Or even, a Donald Trump getting elected to the presidency? All of these are possible, but if and when they happen, it's like, "Where do we go from there?" Will an explorer be satisfied and never seek to explore again or will they feel that drive and desire to move on and explore the next mystery? And where would be the next step? Just some food for thought.
Posted by Derek at 4:35 PM No comments: 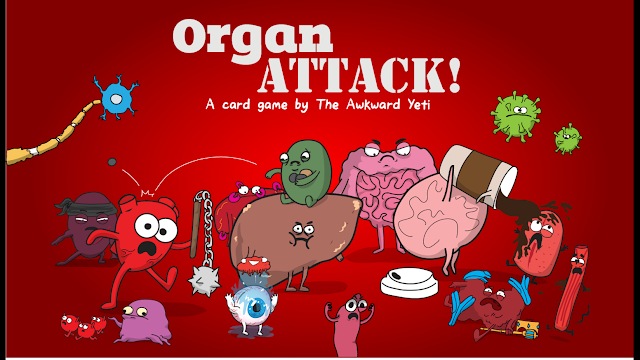 I just recently played a game called OrganAttack! IT was super fun and I highly recommend it.
It was a Kickstarter that was successfully funded and is now available for play. The game is simple. Each person is given a series of organs. Each person lays them in front for all to see. Each person draws 5 attack cards.  The attack cards contain diseases, vaccines, immunizations, and others cards. Your objective is to kill all organs of the opposing players. Whoever is the last one standing wins. Pretty simple right? There are a few more rules than that, like wild organs research, etc... but you'll have to buy the game to find that out.

https://www.kickstarter.com/projects/theawkwardyeti/organattack-a-card-game-by-the-awkward-yeti
Posted by Derek at 2:30 PM No comments:

Mike Pence, stuck between a rock and a hard place. 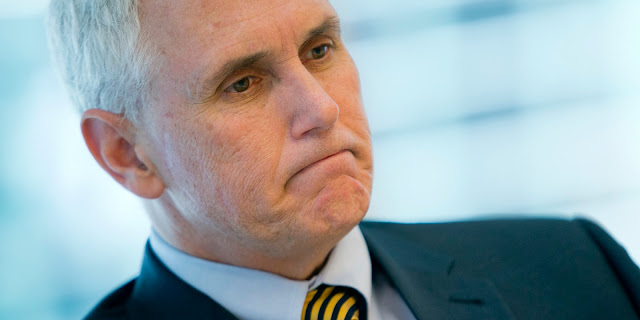 Up until yesterday, most people thought Mike Pence was about the best thing out of the Trump presidency. When paired against Tim Kaine for the vice presidential debate, Pence came across as cool and collected, while Kaine came across as outspoken and obnoxious. Many people were relieved to see Pence was chosen instead of the many other choices that had been thrown around by republicans. Yesterday, though. that all changed.

Mike Pence made the tie-breaking vote in favor of confirming the controversial Education Secretary nominee, Betsy Devos. And his decision may very well come back to bite him. But the real question is, was it really his decision, or was he contractually obligated to support the Trump nominee?

Now, I know you're thinking... He hasn't supported Trump in the past. They have differing opinions on a lot of issues, and he has been outspoken and expressed those. And to that, I would agree. But voicing an opinion on an issue and actually having to vote to represent it are very different things. Whether or not he mentally supports Trump's nominee, it would have looked far worse from an administration standpoint to have the vice president not support a pick for a cabinet nominee, even if they are an unfavorable choice. That's not to say he couldn't have decided vote against her anyway, but it would definitely create a lot of tension within the administration, and would not make for a pleasant work environment, especially since they haven't been in there long and are still figuring things out. And I'm sure Trump would have called him out on it, and that wouldn't have looked good for either of them. Especially when their predecessors were known to get along so well.

So like it or not, Pence did what he did, for whatever reason he did, and if he is as smart as I hope him to be, there was not a doubt in his mind that if it came down to it, he would have ha
d to make that vote. But I suspect that now anything Devos does from this point on, Pence will be held accountable for it. And I feel bad for the guy because even though I don't support his views on a lot of issues, or his decision on this, I feel like he was stuck between a rock and a hard place.
Posted by Derek at 7:29 PM No comments: 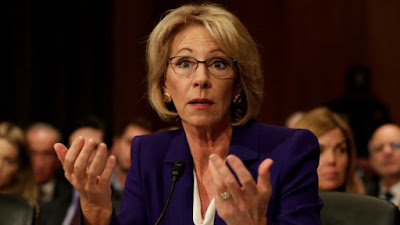 The Betsy Devos's senate committee confirmation was yesterday and was she was approved 12//11. What people don't know is how idiotic the hearing was. If you have any knowledge of the general election and how ridiculous that was, this really fit right into all of that.

A little background first before I tell the story. So, Devos is the most controversial person to be nominated to this position in history. The second most controversial person to be nominated to that position, Lamar Alexander, was the chair of Devos's senate committee confirmation hearing. Devos is controversial because she has no experience in public education. She has neither taught nor
been a student of public schools and has the opinion that education should be privatized and students should get government funded vouchers and attend private schools

When it came to the voting. 22 members were present. 1 was not. So when to voting commenced, the one who was not there was declared a yes in proxy. That sparked annoyance in the opposition and after the vote was declared, Senator  Murray asked about rule 6, which you can read here.
http://www.rules.senate.gov/public/index.cfm?p=RuleVI
Basically it states the vote should count only those present, so it would really be 11 vs. 11. Upon her saying this, a recess was called, and when the recess was over, she asked again and was told she should have asked earlier, but it never states that you need to ask earlier in the rule. The chair made that up. The Democrats then asked to have the chair's decision overruled, and to have a discussion to overrule. The chair said "no, we are just gonna vote.", and they asked then to have a vote for the overrule discussion of the vote to overthrow the chair. Either way, it was going to be 11 vs 11, but then the chair would always count the absent person's vote in his favor.

The most annoying part of this to me was that I don't feel that the chair should get a vote in whether of not to overrule himself. I don't know if that's an actual rule or not that they get to vote, but that sounds really dumb if they are permitted to get that vote.

Lamar kept stating the Democrats asked Betsey Devos 25 times the number of questions Obama's 2 appointees were asked by republicans, and that additional questions to her were unnecessary. But there is a HUGE difference here. Obama's appointees were not controversial and actually had worked in the public education sector before. Now Lamar did say he heard some democrats had said they were gonna vote no either way even if she answered their questions which isn't smart of them to say. But I feel that if their questions were relevant, then they should have been asked, just like I think a discussion about Devos before the voting would have been beneficial, however, that was overruled too. Surprise surprise. And that's politics for ya folks!